Mergers produce synergies, as in (1+1) > 2, right? Yahoo!, after destroying billions in value during a half-decade free-fall is having a fire sale, ending soon (mid July 2016). Should anyone buy it? Mergers often fail to deliver promised synergies. Some firms do bad deals, while others do deals badly and, surprisingly, they often continue doing deals. Some firms are simply toxic. They acquire a great product, team, brand, customer base, etc., and soon enough, they screw it up. The teams leave, the customers leave, etc., and the synergies remain elusive.

So, Verizon (proud owner of AOL) is a front-runner in the bidding. Most any list of “top ten worst” tech deals will include: AOL-TimeWarner, Yahoo!-Tumblr, Yahoo!-Broadcast.com, Yahoo!-GeoCities, AOL-Netscape. Note any repeating names above? Seriously?

My decades-old caulking gun went missing and I need a new one. In my quest to support American jobs, I want one made in USA and “built to last” — no junk that will break and end up in a landfill. In my research I found only one brand that is actually made in the USA. Really? My list below is incomplete and surely contains mistakes, but is what I have found as of July 2016:

IMPORTED – I saw some decent reviews on these:
Tajima: Japan (at least some models are made in Japan)
Newborn: China
Albion Engineering: Taiwan

We needed fencing around our garden, something with small spacing (at most 1 inch) to keep out rabbits and tall enough to keep out deer. Almost all hardware cloth and welded wire is now imported. Reviews online say many of these imports (despite being galvanized) quickly rust (some while still in packaging), have shoddy welds, and inconsistent spacing. They need to be replaced in a few years and end up in a landfill. Buyer beware. Most of the suppliers made it VERY difficult to find the country of origin. A Grip-Rite rep on the phone would not disclose where it was made and repeated, “we are a local, USA company” (the package says, “made in China”). If interested in what I found, see the list below. My list does not cover all makers,nor all products, and may have mistakes. I bought RedBrand. From what I could tell:

MADE IN USA:
RedBrand (Keystone):  Made in Illinois. Buy at www.redbrandstore.com or some retailers
Riverdale: Made in Mass. Hard to find at retail, but can order directly www.riverdale.com
OK Brand: Oklahoma. But, they did not have the size I needed.

Young firms often seek growth capital to expand operations, and of those that choose to pursue an IPO, roughly 2/3 have raised capital from venture capitalists (VCs). The 2/3 proportion varies by year and is greater when lots of tech firms are in the markets (e.g., the dot-com era). In my research paper with Dr. Colette Southam published in Venture Capital journal, we find that a VC-backed firm is 14% more likely to fail to complete its IPO. Not all “failures” are bad; some firms instead accepted buyout bids. Nevertheless, why do VC-backed firms “fail”? In the research we find two primary reasons. First, VC-backed firms have an alternative to a low IPO price. Instead, the VC can fund another round and then retry the IPO later. Second, VC-backers more often “test the waters” of the IPO markets with firms that are too risky or too early and are screened out by astute equity investors. Does this mean your firm should avoid VC-backing? Quite the contrary, only a very tiny proportion of private firms raise VC money, while most firms going public have VC-backing. VC backing increases your chances of ever getting to the IPO stage.

A firm seeking to go public in the U.S. files documents with the SEC. With some minor limitations, it can withdraw from the process at any time. Understandably, media focus is on IPO successes rather than failures, although more than one in five filers does so. Withdrawal is not always a bad thing. For some firms a better offer arrives (e.g., a buyout bid) while for others it is a bad thing (e.g., investors are unwilling to invest). Importantly, the net result of a withdrawal is one less publicly traded competitor. In a recent paper I have with Dr. Craig Dunbar, we show that the existing publicly traded competitors experience a positive cumulative abnormal return of about .35% when a “would be” competitor fails to complete its IPO. Can you profit from this? Not likely. You would have to predict a withdrawal, and then buy stock in competing firms. Only those inside the firm’s IPO process would have enough insight. The rest of us must read the tea leaves.

The graph shows the monthly U.S. corporate credit spread of Baa-rated bonds minus AAA-rated bonds. The bond yields are calculated as Moody’s seasoned corporate bond yields with maturities as close as possible to 30 years. Meaning? When the likelihood of default increases, the bond yield increases. Baa firms are more likely to default than AAA firms. When good economic conditions are expected, investors expect both Baa and AAA firms not to default, and thus the credit spread is small. When poor economic conditions are expected, the likelihood of default of all firms increases, more so for Baa firms. As such, investors demand greater return (yield) and so we see the credit spread increase. A high spread generally indicates(expected) poor economic conditions. 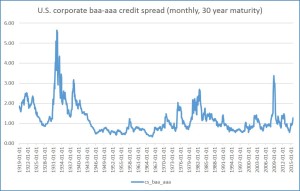 A data file is here.

Withdrawn IPOs are far more common that most people think. Using a set of screens to reduce the universe of typical IPOs studied in the finance field, just over a third of intended IPO-seeking firms withdraw their filings and pursue other paths. The data below show the volume of withdrawn IPOs by year from 1998-2013. This is an incredibly important (and understudied) topic.

In research we apply various screens to the universe of IPOs, and study a subset of “clean” IPOs. We commonly screen IPOs that have unique pricing processes, legal/ownership structures, disclosure requirements, or are small offerings/firms. The data below use typical screens showing the volume of completed U.S. IPOs. Note: a deal can be screen for more than one reason.

A good strategy is one you would not be stupid not to do. What does that mean? In part, that means that it is not necessarily obvious.  Similarly, good (business) innovations are generally novel but also uncertain before becoming reality. Good strategies share must also be novel and not obvious because if they were obvious someone else would likely would have already done it. They are uncertain because the likelihood of successful execution is unclear — if it were certain, someone would have done it, right? Imagine a spectrum of strategies from “stupid” to “brilliant”. The stupid ideas are bad, while the brilliant ideas have already been done suggesting that good strategies fall somewhere in between. Using this novelty-uncertainty framework, a good strategy will be developed and implemented only when you have people capable of novel/disruptive thought, but also willing to tolerate uncertainty, (one would hope) driven by their confidence in their ability to execute.

Still no brick and mortar Google stores? We have beautiful Apple and Microsoft stores — large footprint, high-cost locations full of colorfully-shirted reps and tables with multiples of the product lined up, teeming with customers. Here is a novel, if imperfect, idea. Google could buy Radio Shack, immediately cease doing most everything Radio Shack does, and instead refit the stores to display and sell Google hardware devices. Google has (its own and those of others) tablets, phones, the Chromebox, Chromecast (for TV streaming), and will soon be automating your house starting with the Nest (connected thermostat), among other products like Google glasses. In January 2014 Google paid ~$3.2B for Nest, ~$650M for DeepMind (ever heard of it?), making the $250M market cap of Radio Shack like a rounding error. What would Google get? 4,300 company-owned locations in the U.S., 270 in Mexico, and 1,000 other locations worldwide. Radio Shack debt and cash make the enterprise value a bit closer to ~$425M to own it outright, but this is peanuts. Given that Google does things differently are they going to “me too” a fancy large-footprint stores to compete with Apple and Microsoft or go with 1,000s of stores in ready-made locations close to the people? An issue is the customer experience in the stores. Can Google train reps and offer a quality customer experience with just just a handful of employees in small platform stores?  Perhaps not, however, Google is very good at centralizing — the solution is to push the customer experience into the Google cloud and use its own hardware like Chromebox to allow onsite customers in small stores to interact with those shirted experts at a central location — while not making the locations “dumb terminals”, they offer a consistent user interaction with the ability to deeply train a virtual team. As well, the training required to roll out a new product could be done and rolled out nearly instantly. I want to try some Google products, but how?  Buy the “Shack” and in six months you have 4,000+ Google stores. Bad idea? Maybe.